The cycling Gods have been against me so far this year. Due to an illness in Jan/Feb (much worse than just the normal man flu) and with all the crappy weather we have been experiencing, my motivation to get on the bike has been pretty poor. In preparation for being “match fit”, I took my CX apart to give it a good clean and soon discovered the hub was sounding like a tombola as Tank put it. £25 replaced and fitted the sealed unit.

Apart from a couple of turbo training sessions to keep my legs ticking over, my first road outing of the year was on the 11th of March around Grangemouth. Four Miles in and I was on the phone to my Mum: “Happy Mother’s day…..can you pick me up, I’ve got a puncture”, I had left my tyre levers back at home. With the glass segment removed and the rear tube changed, I was back on the same route as before when my front tyre punctured after a further seven miles. It was game over – I had no more spare tubes and knew where my luck was heading if I tried to venture on. Currently on order: 2 new tyres and a cupboard full of spare tubes.

Next on the agenda – I am heading to Spain in April for a few weeks where the plan is to get some bike miles covered, hopefully with some familiar faces. I have not signed up for any sportives this year but I’m looking to getting out more, especially with the BCR crew.

Back in 2012, Daz sent out a text asking folks if they fancied meeting up the following week for a bike ride. It was reminiscent of being 7 years old and arranging an after school meet up with classmates. My tool of choice back as a kid was a Raleigh Strika, the text Darren sent required a road bike – a bike that I, and a few others contacted, did not own.

My Dad had picked up road biking a few years earlier and after a quick call to him, by the end of that night I was in his kitchen learning to clip in and out using his turbo trainer on the bike he was going to loan me.

A week on from the initial text, on the 31st May 2012, we arranged to meet at Polmont Sports centre where most were dressed low-key for the outing. I was pretty much the stand out cycling equivalent of a Full Kit Wanker. My Dad had given me ALL the gear, including Lycra bib shorts/top replica team kit. I looked the part but sadly had not been on a road bike since I was about 10 and owned a Puch 5-speed racer.

We only covered about 14 miles that night, heading through Linlithgow and Bo’ness then back to Polmont, but I liked the idea that we were hitting speeds of around 18mph comfortably.

Our first BCR outing ended up being memorable for all of the wrong reasons; Daz picked up two puncture’s before even getting out of Polmont and decided to head home early taking a short cut through a field full of cows who took a fancy to his MAMIL attire and chased him out. Secondly, Derek was thrown over the bonnet of a car belonging to a motorist not paying attention at a junction (thankfully, both he and his bike were ok).

It was from this night, and the fun we had, that made me go out and invest in a road bike.

Last year I watched the Barkley Marathons documentary on Netflix.

This week I stumbled upon it again and watched the full film, where, once again my eyes were glued to the screen:

A very restricted and carefully selected number of candidates run a 20 mile torturous loop, 5 times (each loop carried out in the opposite direction from the one before) with an aim of completing all 100 miles within 60 hours. There are no marshalls or hi-tech ways to govern runners on the course. Instead, at the start of every loop, each runner is given a number – throughout the 20-mile course, a series of books are located and the runners are required to tear out the page matching their number, bringing it back as proof that they went to all locations on the course.

Mind over matter on a completely different level – these guys are running an ultra-marathon from Hell. Stopping after each loop to get some rest, feed up and treat blisters the best they can before heading out to do it all again – the number of people managing to complete all 5 loops within the time limit is in the teens since it started in the 1980’s

Many of the BCR crew have musical talents and a few have been in bands – I am the complete opposite of that. My taste in music is wide and varied, with only a few genres that do not get a tick in a box from me. My wife kindly bought me a gym membership for Christmas and I find listening to some Dance/House music keeps me motivated throughout. Graeme Park uploads a weekly 2-hour mix with tunes both old and new – recommended

I have just completed Lee Child’s most recent release, The Midnight Line. Another story featuring transient ex-military policeman Jack Reacher. I have read all of these books over the years which all very much follow the same format – think Littlest Hobo, he gets involved with bad situations, resolves them and then moves on.(CLICK HERE) 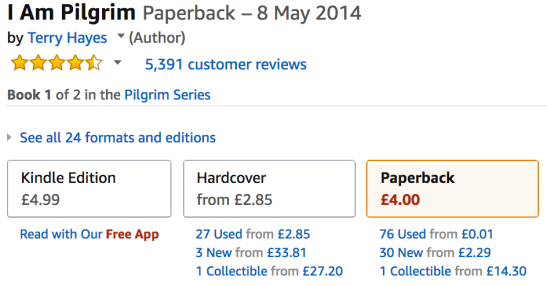 I am about to start I Am Pilgrim by Terry Hayes recommended recently by friends when out for food. (CLICK HERE)

I am not a fussy guy, pour me a glass of white and I will drink it 🙂